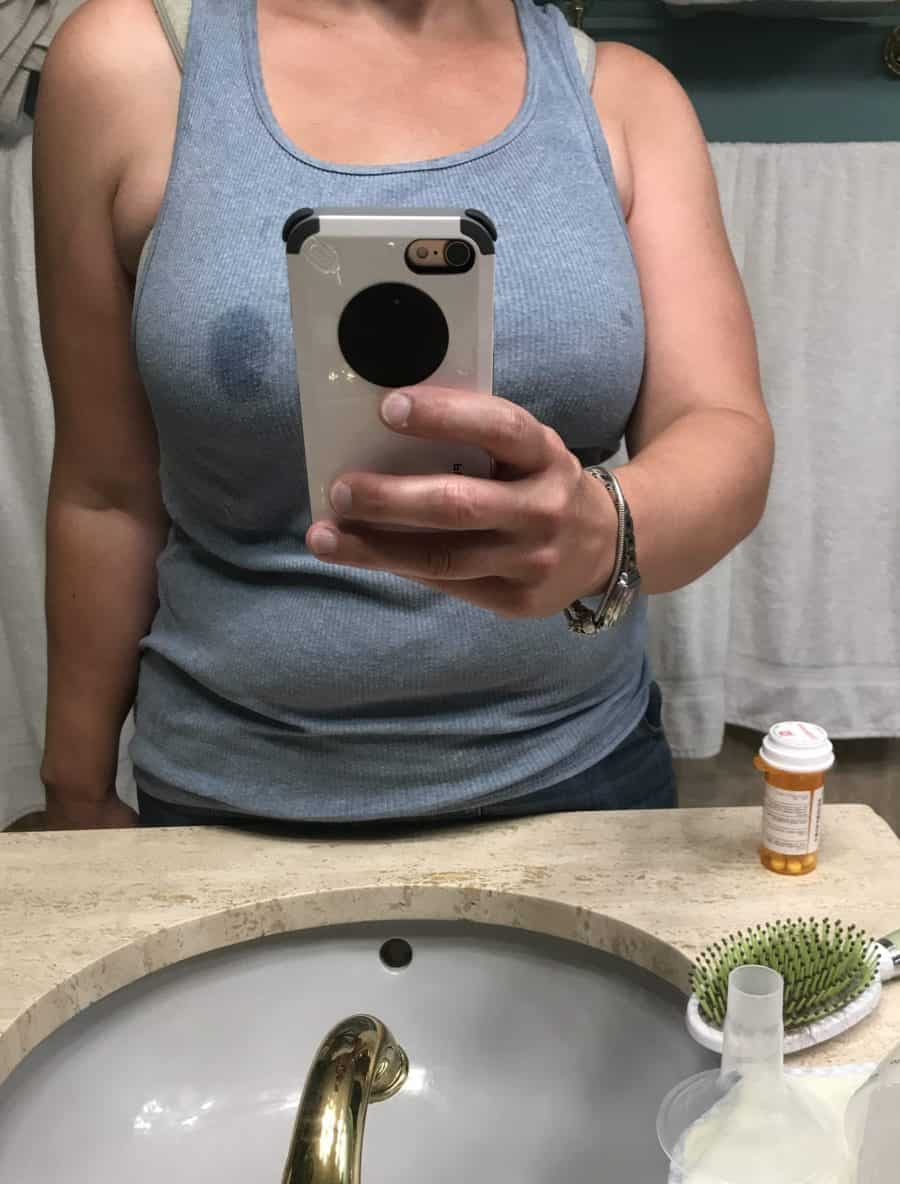 18 months of Exclusively Pumping for Twins

I nearly Gave Up as Soon as I started

I vividly remember the first time I pumped after I left the hospital. I was trying to use my rental hospital-grade pump my insurance company provided. It made me cry, it hurt, it was difficult to set up and use. Pumping was a failure. I only used it once.

The actual night I nearly quit. My milk had come in and my breasts were so engorged I resorted to wrapping them with cabbage – which is what everyone said to do. The coolness helped, but once it warmed up I just sort of smelled like cole slaw.

I wish I had known better. I wish I had had an ally. That’s why I am so genuinely pleased to partner with Aeroflow Breastpumps to talk to soon-to-be-Moms about the services they provide and their mission to increase the national incidence of breastfeeding.

Our twins were born 8 weeks early after an extraordinarily difficult couple months. I didn’t have the energy or bandwidth to coordinate any of those things before they were born. After my C-section and with the stress of my babies in the NICU in a city and hour and half from my home, I could barely navigate the system with my insurance company. Aeroflow Breastpumps would have been an amazing resource for me.

Yes, pumping hurts. For me, it didn’t stop hurting for months. Gear and technique helped. Pumping can get obsessive. Am I pumping enough? Am I producing enough? Tracking my minutes pumping. Tracking my output. It was an outlet for my anxiety and a focus of it. With twins I felt out of control most of the time. Pumping was one thing I could control. I loved the Medela App for help with tracking this.

I had to drink between 150-180 ounces a day of water to keep my production up. No kidding – but at least part of that was in la Croix and Diet Coke (and I’m not even sorry). I did drink alcohol but I was thoughtful about it.

I pumped in parking garages in my car, in a bar parking lot, in doctor’s offices, indoors, and outdoors. I pumped in front of my friends and strangers. And more than once, I pumped during a movie under my coat with a hand pump.

I had one lame boob (0r if you are an optimist, one super boob – if you haven’t been there.. my right breast produced only a fraction of what my left one did) so pumping for twins meant I pumped all the time. Literally around the clock – every three hours. My twins slept through the night long before I did. This isn’t average. And it isn’t what I planned to do. Just because I did doesn’t mean someone else should.  I have never worked so hard at something for so long. Especially something my sons will never thank me for doing.

Over 18 months I pumped a little more than 1700 hours to feed my twins. I DO NOT advocate that what I did is what other moms should do. My bottom line is that Fed is Best and the ONLY person who should be making the decisions about breast feeding is Mom. Her body. Her choice.

Without small goals I would have NEVER kept it up. In fact, if you told me I had to do 18 months when I started, I would have told you where to go – and it would not have been to a vacation destination.

Goal #1 – while they were in the NICU

I pumped the first time within 20 minutes of my C-Section. We learned that NICU babies are at high risk of an ugly complication called NEC (Necrotizing enterocolitis) and that breast milk dramatically reduces that risk – here’s an article on the benefits to NICU babies, do yourself a favor and don’t google NEC. I committed to pumping while my sons were in the NICU. Over seven weeks it was all I could control and the primary thing I could do for my sons other than holding them. We worked with OT and Lactation Nurses in the NICU to practice their nursing. Both boys struggled with staying awake while, so we would ALSO have to bottle feed them. With scheduled feedings every three hours (even after we left the hospital) I was either nursing or pumping for more than 1 hour out of every three.

Food safety is Key with breastmilk – they taught us this in the NICU. Medela Parts were easy to clean and sanitize with their steam bags. I dedicated the sink in my bathroom to breast milk only and kept it clean with their wipes.

Because of their nursing struggles, I became an EP’er (one of my sons nursed once a day). My next goal was six months I had already done 1/3 of that. Handing my children to someone else to feed was amazing – I got some rest for the first time since I got pregnant. 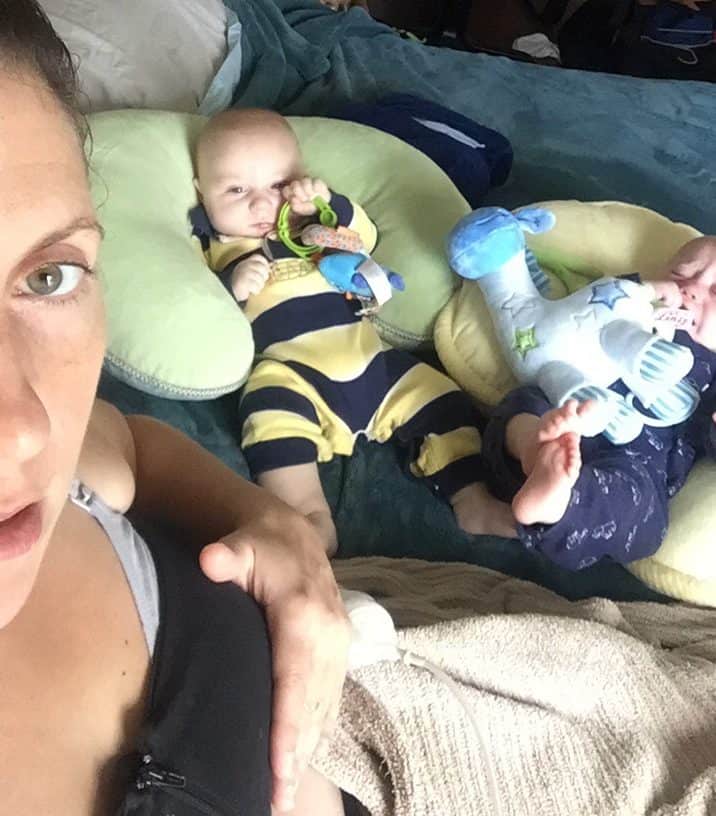 A handsfree pumping bra was priceless. And toys nearby for when I was pumping and entertaining a couple of little guys. Or, in this picture, failing to entertain one of them.

Goal #3 – introduce food and get through flu season

By 9 months many healthy children are eating some food and I thought maybe by then I wouldn’t need to pump as much. This was wishful thinking. Nine months became 12 so we could get through the end of flu season.

I kept pumping – at a year they weren’t eating much food due to a delay. They also hadn’t been sick at all. So I said 3 more months. My guys were sleeping 8 hours at a clip at this point, but I wasn’t.

At 15 months I started pumping just 4-5 times a day and was content to pump enough for their overnight bottles. I finally started sleeping 6 hours at a time and feeling like a human. I spent the next 3 months slowly weaning down, which is its own freakin post. I pumped my last milk right around 18 months.

The very last milk I pumped. I ended my pumping journey with about 30 ounces in the freezer. A power outage thawed that milk and we had to use it before I wanted to. It broke my heart when the last of it was gone.

After I finished I took some pictures of the gear that had been with me for a year and a half. I put a lot of hours on these parts and they didn’t let me down.

Along with working with your insurance company Aeroflow Breastpumps can help with choosing the pump and accessories that will work best for you. This is key, because what worked for your BFF might not work for you. Having an expert help you decide what is best for you is worth it.

Our hospital provided medela gear to us and I am a huge fan. Their sterilization wipes and steam bags helped us ensure food safety for our little ones. Their replacement parts were easy to find and use.

My Medela parts and my Kiinde Bags never leaked. I can’t say the same for me.

We rented an hospital grade pump that the NICU suggested for my particular situation – here’s where it gets tricky. Hospital Grade pumps aren’t necessarily better – they do different things than a standard pump and have different features. My hospital grade pump wasn’t meant for travel – so for when I was away from home I used a standard Pump in Style from Medela.

Kiinde – milk storage and bottles in one – I can’t say enough nice things about this system. In fact, Aeroflow Breastpumps can help you figure out if you are one of the lucky folks who’s insurance actually covers the cost of the bags (lucky YOU)!! These worked exactly as advertised. I used literally thousands of these and I only had two bag failures. It’s pretty awesome not to worry about bags breaking or leaking. Also, when you go through 16 bottles a day for a year not having wash bottles over and over again is a lifesaver.

One day’s worth of bottles for my twins. Thankfully we used disposable bags so I wasn’t washing 16 bottles a day. We still had to wash nipples, but that was a piece of cake.

As you get closer to the arrival of your little one, don’t hesitate to let Aeroflow Breastpumps help you along the way. I wouldn’t talk about them if I didn’t truly think they offer a real valuable resource for Expectant Moms.

Did you EP? What pro tips do you have you can share with Fort Birthday? Shout it in the comments. 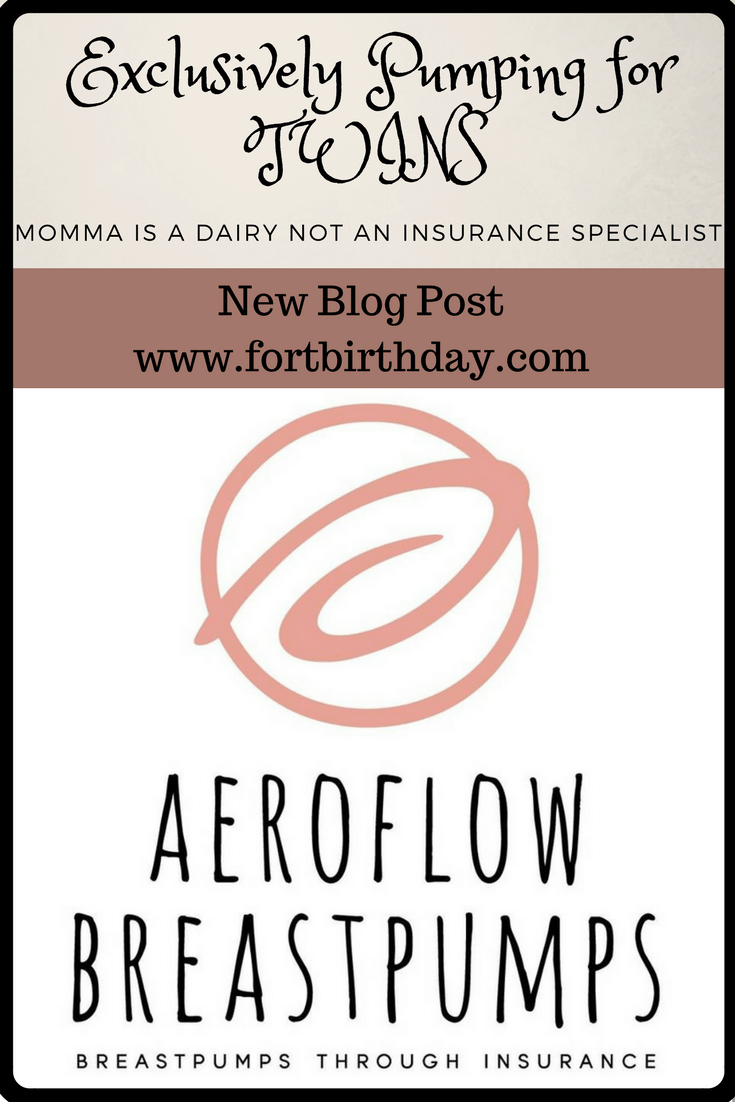 Make sure to check out my new book, This Sucks – Pump Like a Pro – A practical guide for exclusively pumping.

This website uses cookies to improve your experience while you navigate through the website. Out of these, the cookies that are categorized as necessary are stored on your browser as they are essential for the working of basic functionalities of the website. We also use third-party cookies that help us analyze and understand how you use this website. These cookies will be stored in your browser only with your consent. You also have the option to opt-out of these cookies. But opting out of some of these cookies may affect your browsing experience.
Necessary Always Enabled
Necessary cookies are absolutely essential for the website to function properly. This category only includes cookies that ensures basic functionalities and security features of the website. These cookies do not store any personal information.
Non-necessary
Any cookies that may not be particularly necessary for the website to function and is used specifically to collect user personal data via analytics, ads, other embedded contents are termed as non-necessary cookies. It is mandatory to procure user consent prior to running these cookies on your website.
SAVE & ACCEPT